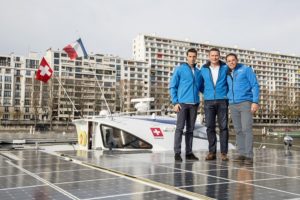 “I support this foundation because it offers solutions to speed up energy transition as well as reduce the plastic pollution of the oceans.”

A slalom canoe single specialist, whose career at the sharp end of international competition spans 2000 to 2012. He was the triple Olympic champion in Sydney in 2000, in Athens in 2004 and in London in 2012, and is the only French athlete to have won three gold medals at three different Games, as well as triple world champion status (2006, 2009, 2010).