The 21st stopover of the Race for Water Odyssey is coming to an end and the crew is preparing to set sail for Hong Kong.

Race for Water moored in Puerto Princesa, capital of Palawan, located 550 kilometres from Manila, in the Philippines for nearly two weeks before visiting the island of Pangatalan.

Supported and assisted by the Sulubaai Foundation and the Palawan Council for Sustainable Development, the Race for Water crew welcomed and raised awareness amongst 594 people including 361 school children...

Although Race for Water sailed in turquoise waters and enjoyed the view of white sandy beaches, the analysis is nevertheless that waste treatment remains a problem... 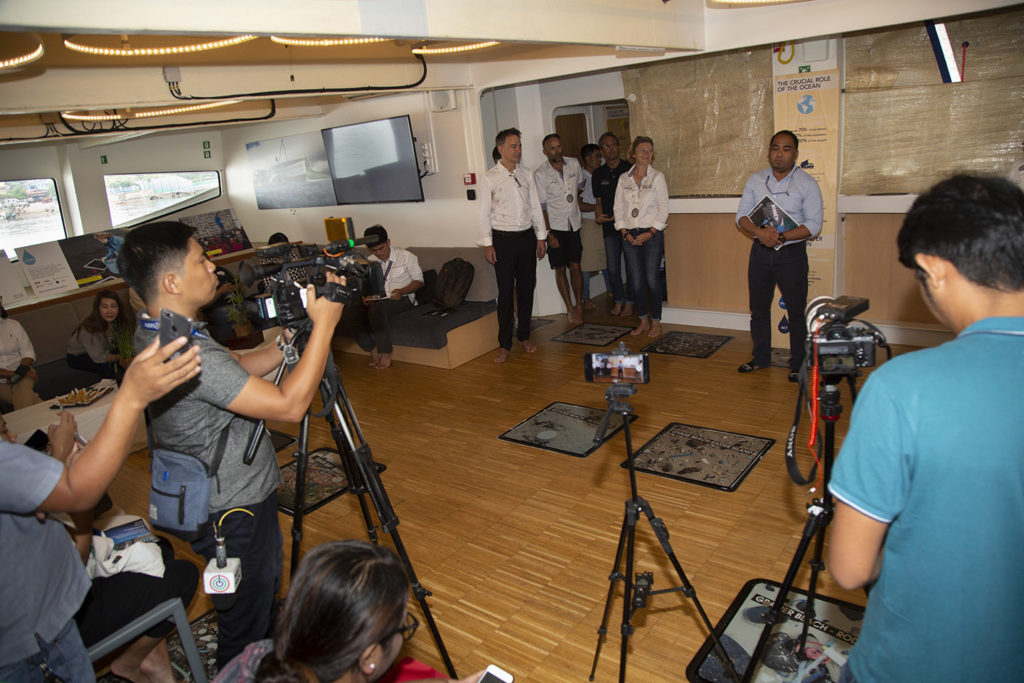 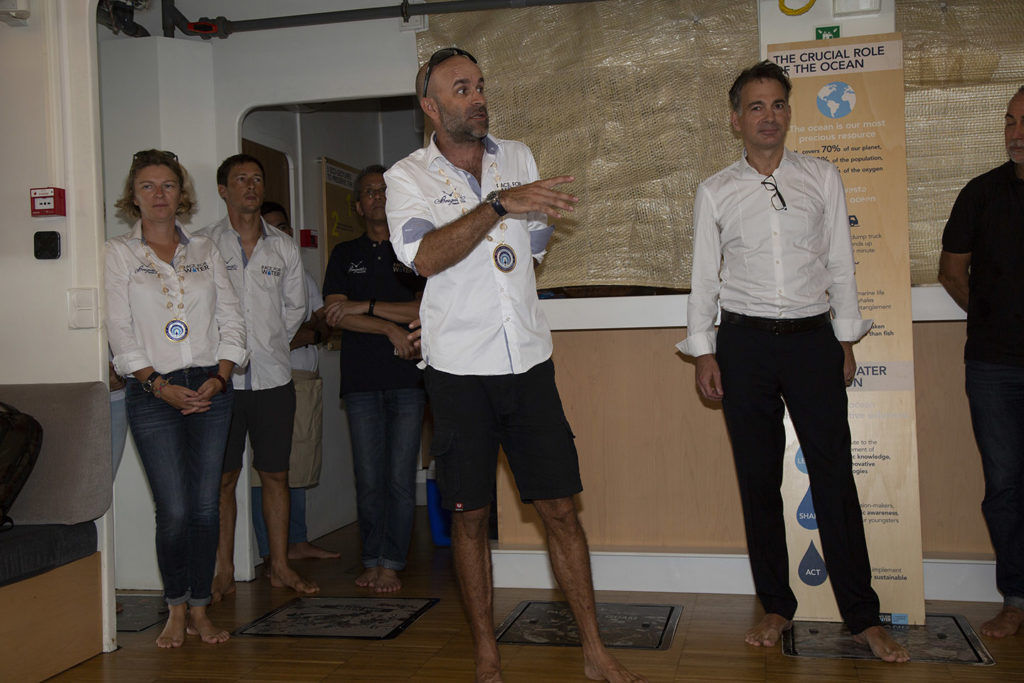 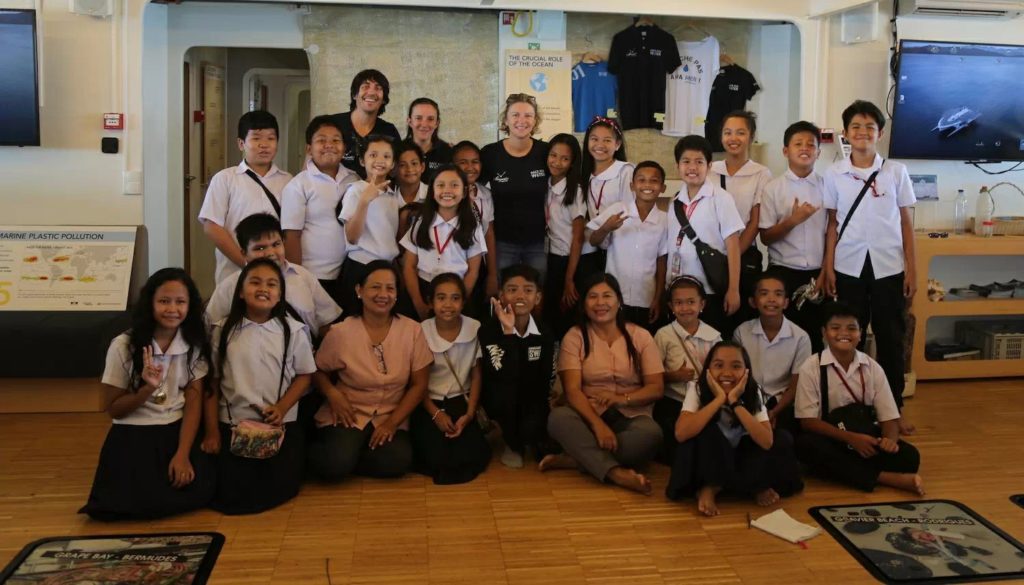 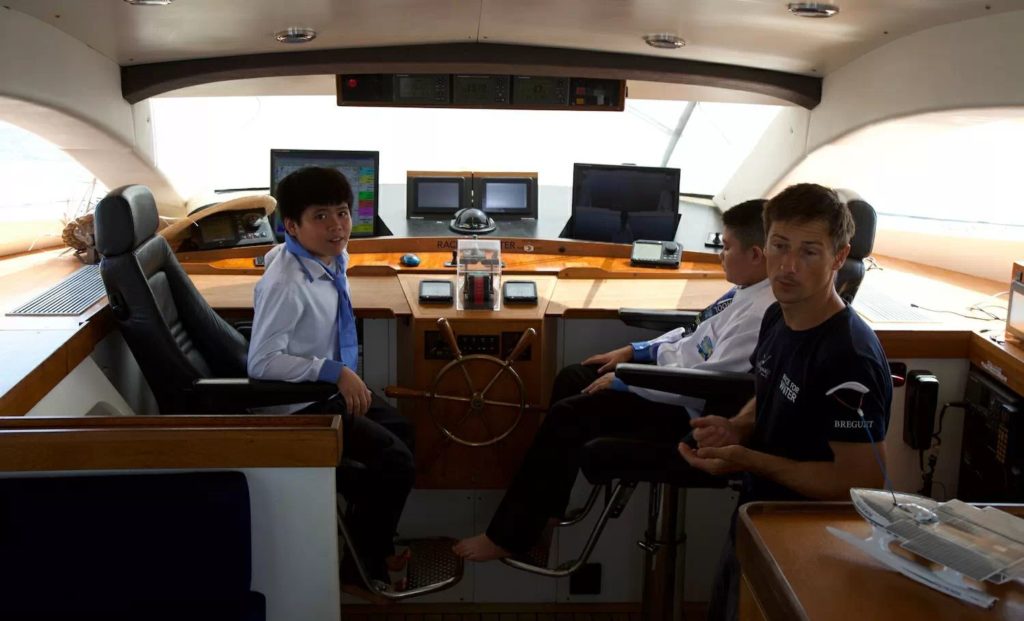 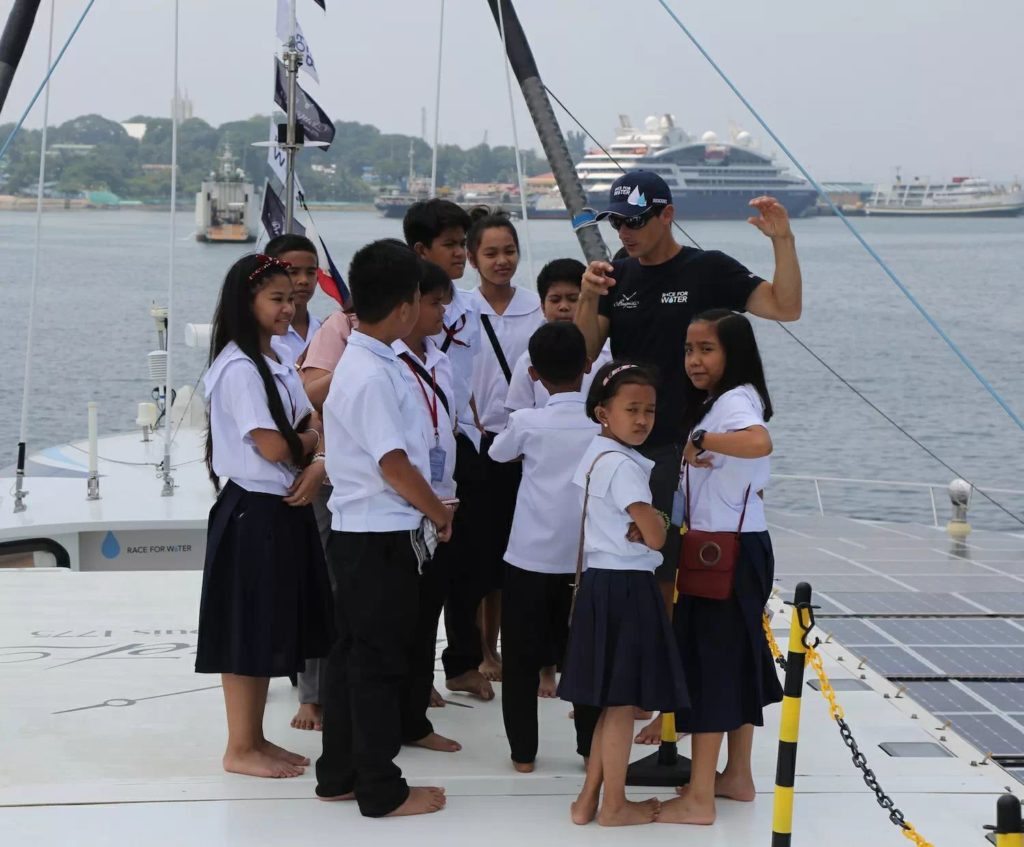 Annabelle Boudinot, second in command and member of the ACT team:

“Turquoise waters are home to many corals, mangroves and sandy beaches, tall black granite rocks falling steeply into the sea, on which hangs lush vegetation. On the roads, we must mention the famous “Tricycle”, a small motorcycle decked out with a homemade structure with a double bench, allowing to accommodate up to 5 passengers (admittedly, a little tight, but we tested it!). The tricycle is a good example of Filipino creativity and practicality. Another example of this creativity is the trimaran boats, models of lightness and speed for a likely low cost. Seeing these boats, I cannot help but reflect that the road to Polynesia passed through here!

The province of Palawan is a jewel of the Philippines, a Biosphere Reserve since 1992 for its incredible terrestrial, coastal and marine biodiversity. It includes an exceptional marine reserve: the Tubbataha Coral Reef Natural Park, a UNESCO World Heritage Site for its rich biodiversity. A second site is also part of the list: the underground river of Puerto Princesa. And finally, the supreme postcard, the site of El Nido, which has hosted several film shoots… This list is not exhaustive, but it gives an idea of ​​the richness and beauty of the place.

Composed of an eponymous main island, the province has a territory of 14.500 km2 populated by more than 1 million inhabitants. 1 million is also the number of tourists who visit the sites of El Nido and the underground river every year.

Another striking feature of the island is the cleanliness of the streets. This is one of the cleanest sites we have ever seen, here they have the culture of cleaning! Several times a month, on Saturdays, everyone rolls their sleeves up and picks up the rubbish around their homes. As a result, there are very few plastics in thewild.

The plastic panorama is not idyllic, only half of the waste goes to the landfill of Puerto Princesa, which is “almost” complying with the standards… Indeed, the liquids treatment system is insufficient in times of flooding, and the site has been full since 2015. The only solution is to build up the heap and cover it with a tarpaulin from time to time, which is certainly insufficient… 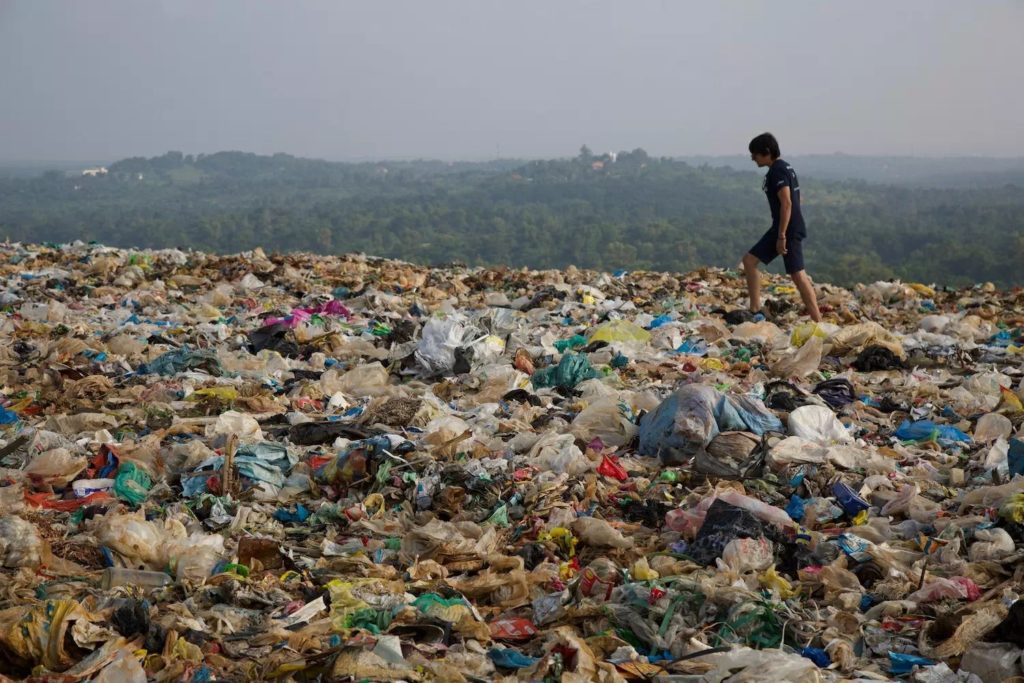 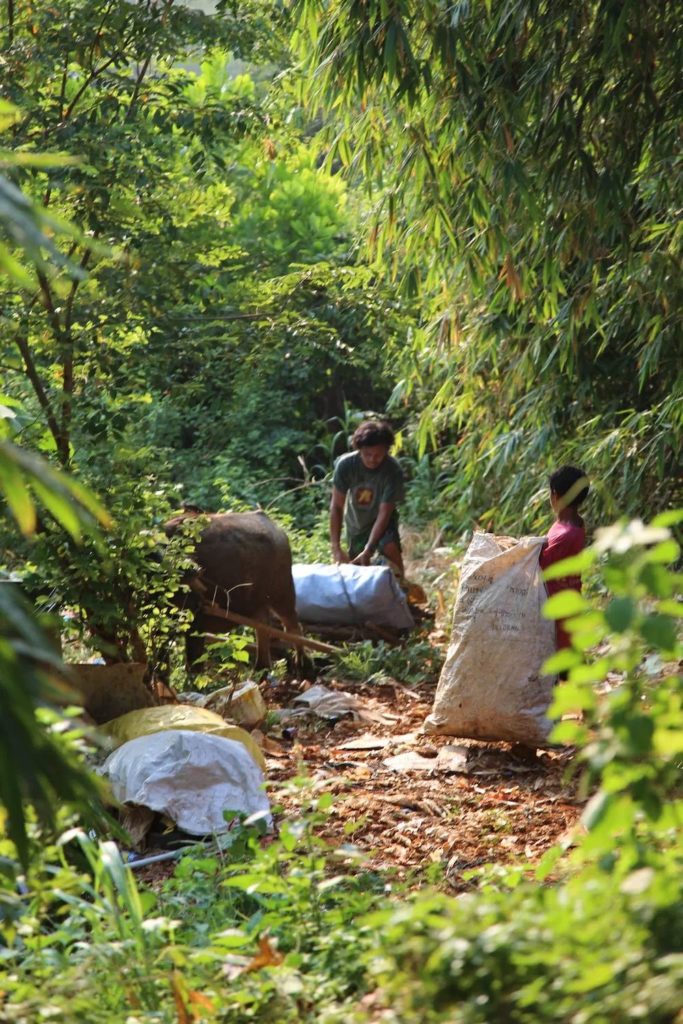 Selective collection is in place and seems to work rather well, the municipality collects organic and inorganic waste, and tricycles pass door to door and buy recyclables for a few pennies. The tricycles then bring them to the “Junkshop”, there are about twenty on Puerto Princesa. These shops are responsible for finalising the preparation of the recyclables and then sending them on to the cargo port from where they will be shipped to Manila.

Collection is firmly in place on Puerto Princesa and its region, and the landfill receives “only” non-recoverable waste, which represents 13% of the total and half of which are plastics. For the region of Puerto Princesa, that already represents almost 23 tons a day…

These figures were presented to us at the press conference by the province’s environment department. This department and the PCSD (Palawan Council for Sustainable Development) were also present during the workshop, demonstrating the province’s willingness to find solutions to sustainably manage waste on the main island.

It was the PCSD that co-organised our stopover with the Sulubaaï Foundation, of which Fred Tardieu is the president. He created the foundation to restore the vegetation and seabed of a local island, make it as eco-friendly as possible and help ecosystems, destroyed by human over-exploitation, to rebuild themselves.” 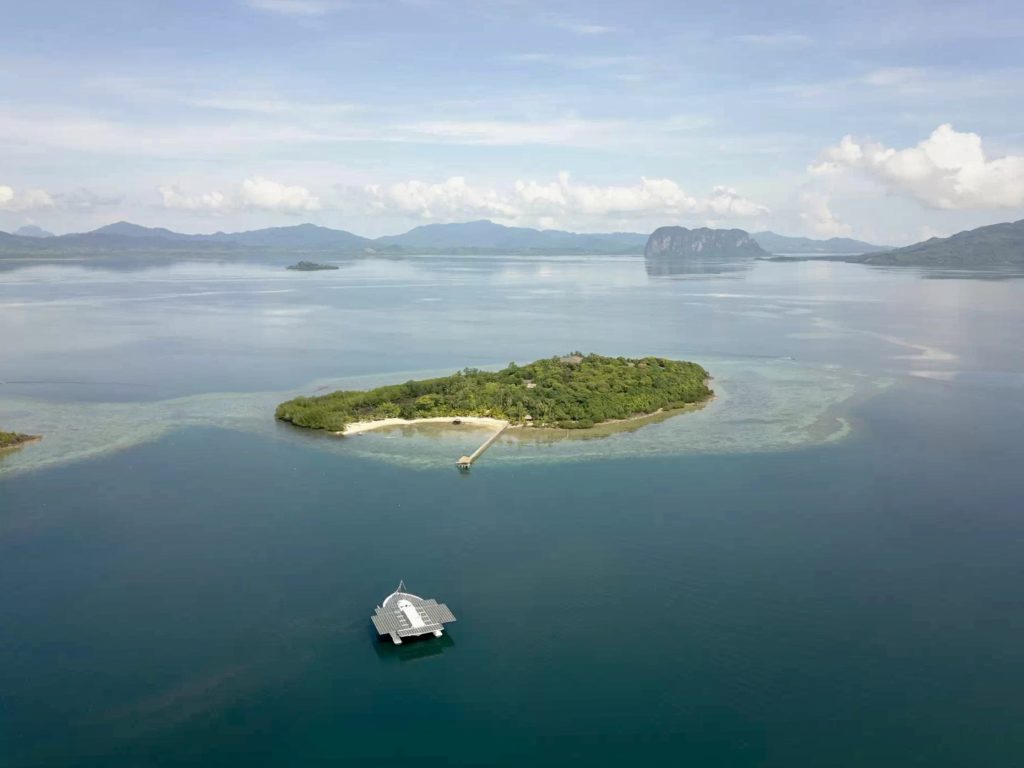 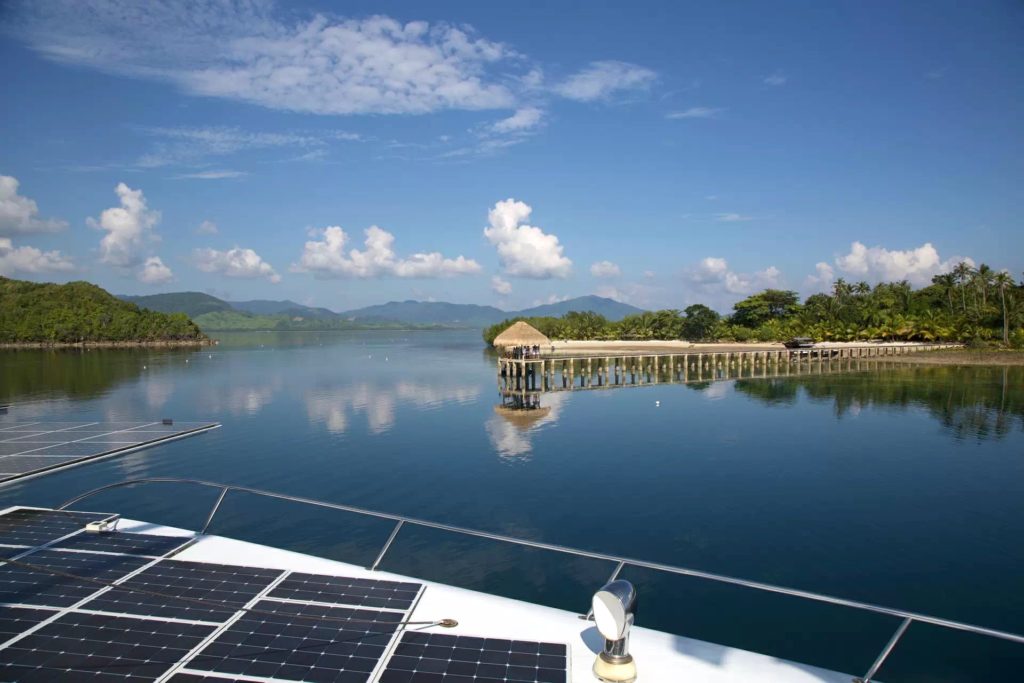 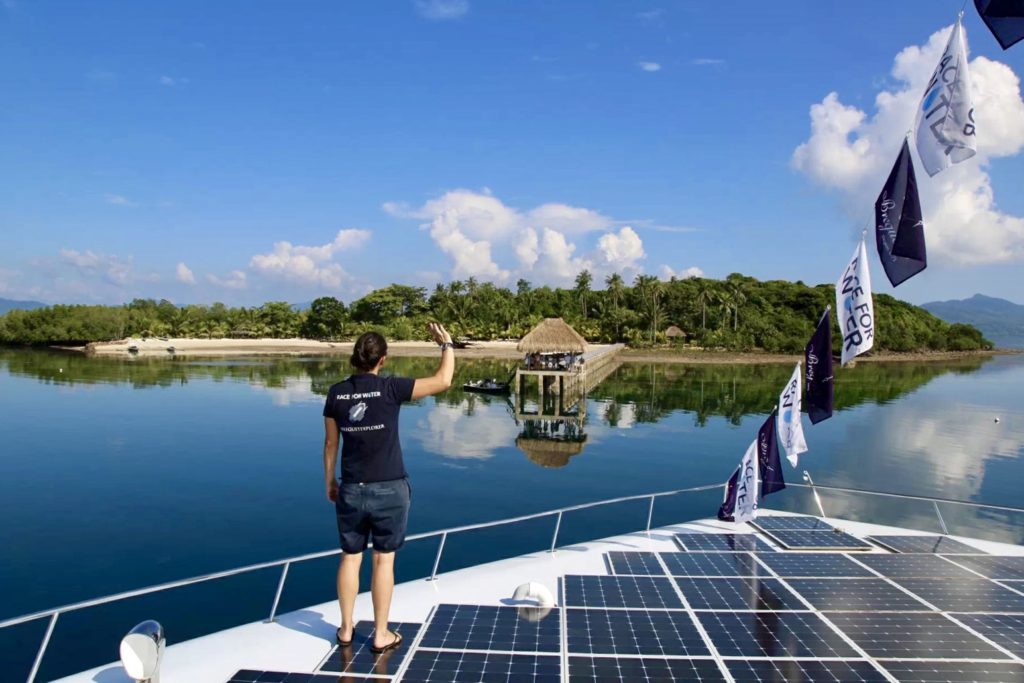 On the way to Japan.