The island steeped in legend

Having left Talcahuano, Chile’s primary military, industrial and fishing port on 31 July, after a month-long stopover, Race for Water launched into her Trans-Pacific crossing. The first leg of this journey led her to tie up at a legendary island, that of Robinson Crusoe located 700 kilometres from the Chilean coast within the Juan Fernandez archipelago. The ten-day stopover really struck a chord with the crew of the Race for Water Foundation’s ambassador vessel. Analysis.

“Isolated, the small community of some 800 inhabitants lives on the mountainside on an island that looks just like the backdrop for a film about dinosaurs”, explains Annabelle Boudinot, second in command of the vessel. “The countryside here is both beautiful and unique. There are special species of plants on the island, that are both large and luxurious. Moreover, the national park which encompasses native forest is recognised as a Unesco world heritage site. They have also developed some protected marine spaces, enjoyed by the sea lions, which have recolonised the beaches to the south of the island. Interestingly, this is a local species. Indeed, the sea lion with two coats, has gone from near extinction, with some 40 specimens in the sixties, to several thousand specimens today. This has shown the locals how important these measures are and how effectively they protect the environment.” 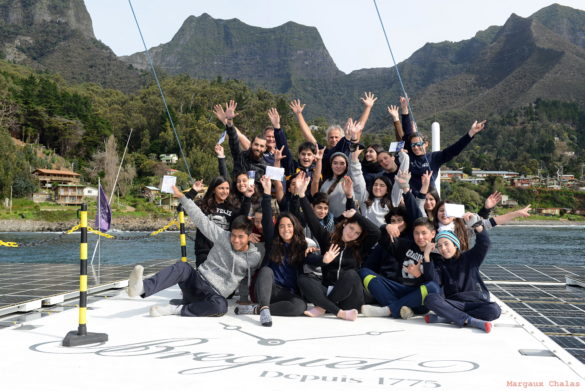 On this the 9th stopover for the Race for Water Odyssey, 110 people were welcomed aboard, including 72 of the 147 students that go to the island’s college. This group of students was tasked with learning how to preserve the oceans and raise awareness among the other students. It’s a project to keep watch over the oceans. A video of their time aboard was made so as to share the tour with all the other inhabitants of the island.

Annabelle: “Accompanied by Felipe Paredes, a correspondent for the National Geographic on the island, we visited the beaches to the south of the island, which are the most affected by the floating waste due to the marine currents. We visited the Arenal beach and the Baie del Padre beach. There we collected several kilos of waste, the bulk of which was fishing net remains. We also noticed that the sea lions like to play with this waste, which can injure them unfortunately. They can get pieces of net trapped around their neck and then as they grow, these sea lions die from strangulation. Thanks to Felipe, we were able to rescue one of them, as he managed to isolate the sea lion, hold onto it and remove the rope which was strangling it.” 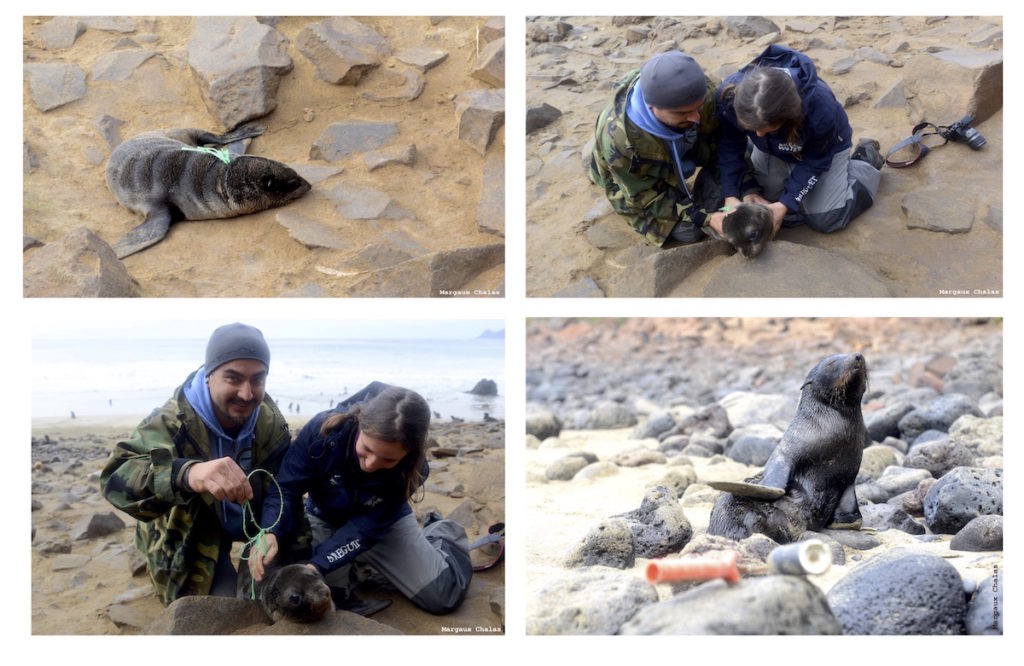 The principle of waste management on the island up to now has involved landfill sites, albeit with an attempt to sort the aluminium, plastic and glass. During recent years, several initiatives have been put in place: distribution of compost bins around the island’s homes and the installation of ‘clean points’ offering waste sorting bins. Unfortunately, for several months, the sorted waste (aluminium, plastic, glass and cardboard) has not been taken off to the mainland. It is still collected on the island in the hope that things start moving again. In addition, there is still a lot of work to be done to raise awareness about waste disposal since, to date, 90% of households do not sort the rubbish in their bins.

“Today, deforestation of the ground with the aim of creating more landfill sites has been too significant, leading to landslides, which is uncovering the waste already buried. The town is attempting to replant so as to shore up the ground again, but that takes time… At the waste collection centre, we noticed that the waste is burning continually in open sites. The presence of organic and recyclable waste proves that sorting and composting is certainly not a habit among the locals. Equally, the skips containing the glass are mounting up without any solutions going forward”. 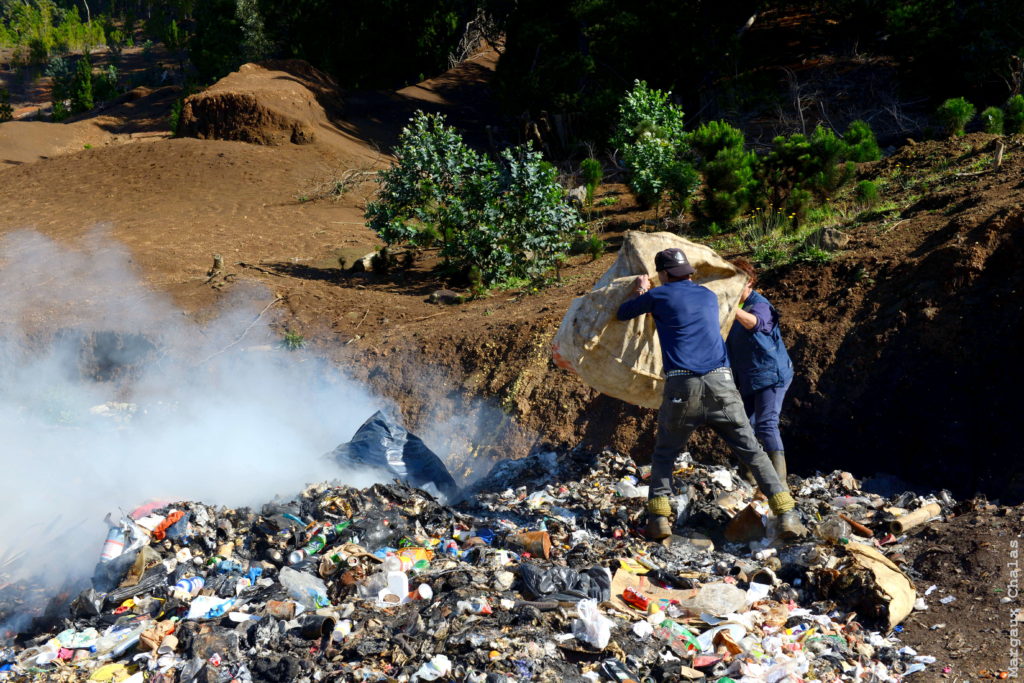 The island generates 325 tonnes of waste a year: 20% is recyclable and 15% is plastics. With the arrival of Race for Water, it was easy to gather various protagonists around the table and discuss numbers and stats, which have in turn enabled Marco Simeoni, President of the Race for Water Foundation, as well as Olivier Lepez from the partner company ETIA, to carry out an early study to see whether the instalment of a high-temperature pyrolysis machine designed to transform plastic waste into electricity, would be timely. The findings suggest that over a 15-year period, the machine would enable the current cost of electricity to be maintained, whilst processing all the island’s solid plastic waste. The machine’s operating capacity would generate 5% of the island’s electric needs. Watch this space…

Various institutions on the island also benefited from Race for Water’s presence to exchange ideas and share their tourist-related problems. Though the island currently welcomes 1,200 tourists on the island every year, the locals would like to increase the volume a little and above all develop selective sorting and sustainable tourism. A few ideas have been discussed with this in mind, such as the implementation of a waste tax, enabling the waste generated by tourism to be recovered, or have instructions attached to take the waste to the local traders, and finally the installation of a water fountain associated with the sale of reusable water containers.

We have to admit that, when it came time to leave this remote island, the desire to evolve and to learn was omnipresent. Our visit brought a lot of hope and now it’s down to us all to help turn these ideas into reality and shift the boundaries. 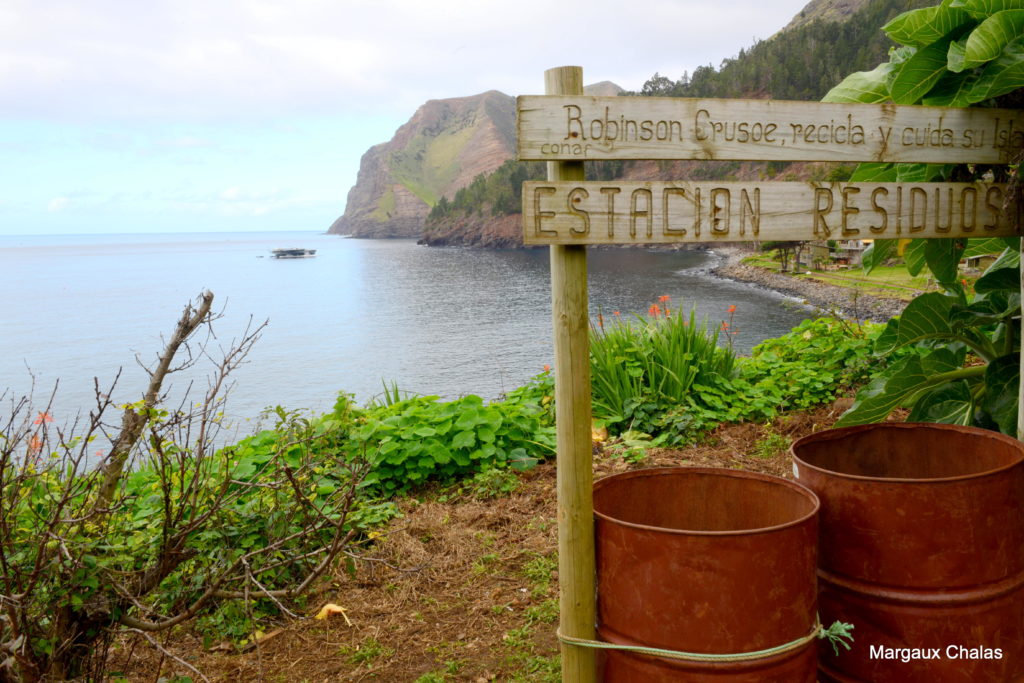