Environmental problems linked to plastic waste have become a major concern in Malaysia. The country has been ranked 8th in the world where plastic waste is the worst managed. Jenna R. Jambeck’s study estimated that Malaysia had mismanaged 0.94 million tonnes of plastic waste in 2010, of which 0.14 to 0.37 million tonnes could have ended up in the oceans. Malaysia comes in, according to this same study, as the 5th global plastic polluter of the oceans.

During our stopover in Sabah we sought to better understand this situation and its challenges in order to help implement the most appropriate solutions.

Sabah is a Malaysian state occupying the northern part of the island of Borneo. It is famous for Mount Kinabalu, which rises 4.095 metres above sea level, and its paradisiacal beaches, coral reefs and tropical rainforest. Several national parks on land as well as at sea are home to an abundant fauna including the emblematic but critically endangered  Orangutans.

Sabah’s economy is mostly based on the primary sector. The main productions are oil, gas, tropical timber and palm oil. Tourism has also been developing extremely fast for several years.

As in so many parts of the world where nature is rich and generous, the population explosion, the development of mass tourism and, in Sabah especially, significant migratory flows have not been matched by the implementation of infrastructure needed for waste management and water treatment. The resulting pollution has disastrous consequences for local biodiversity and represents a danger to public health. 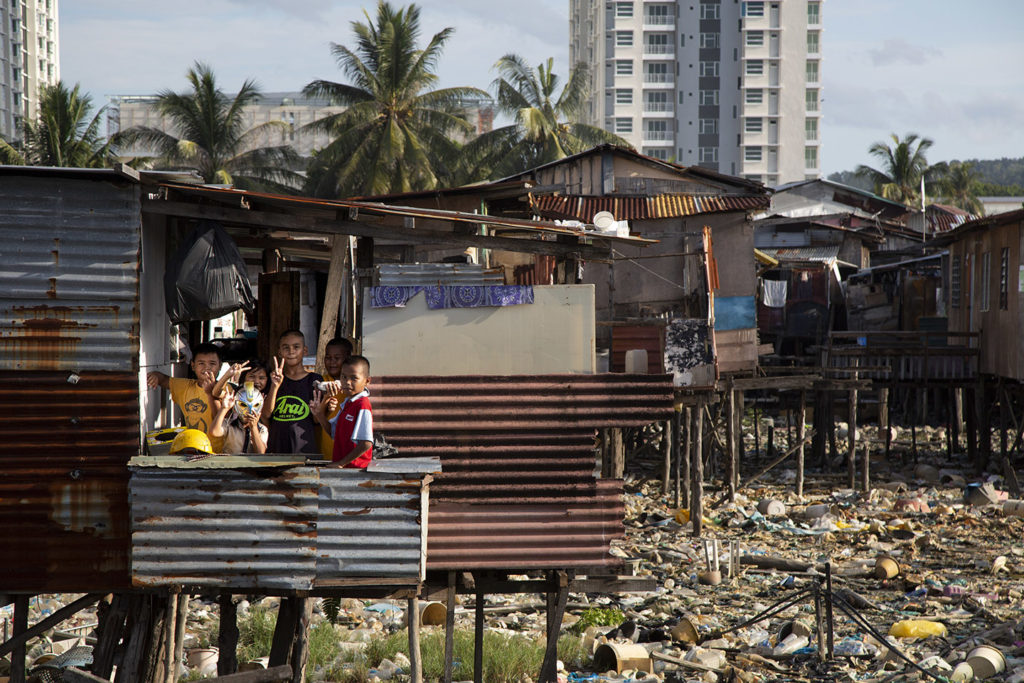 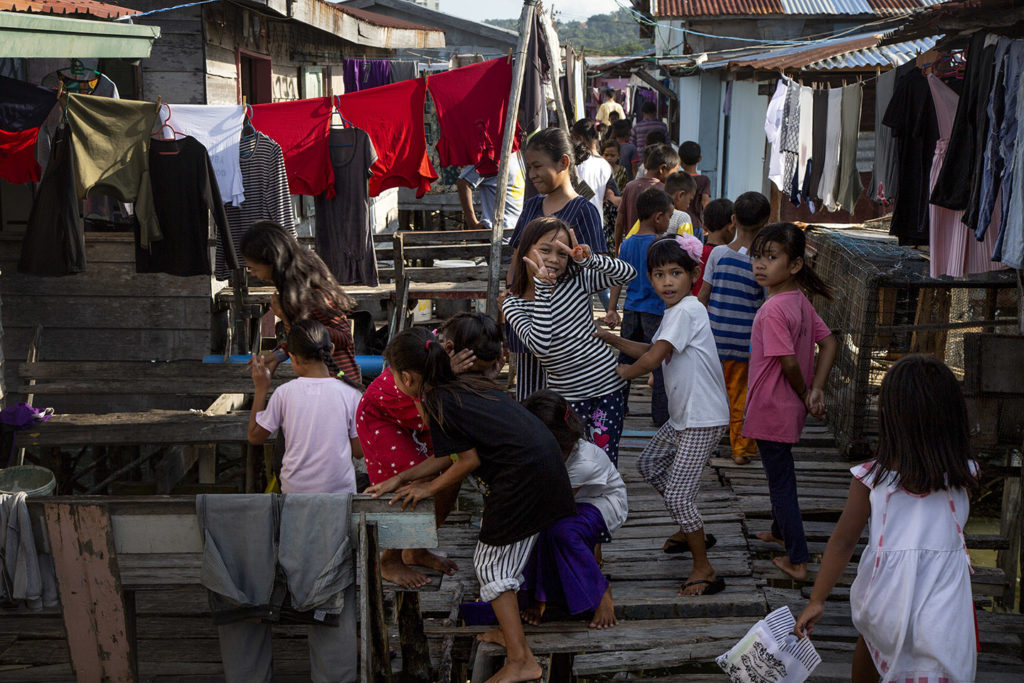 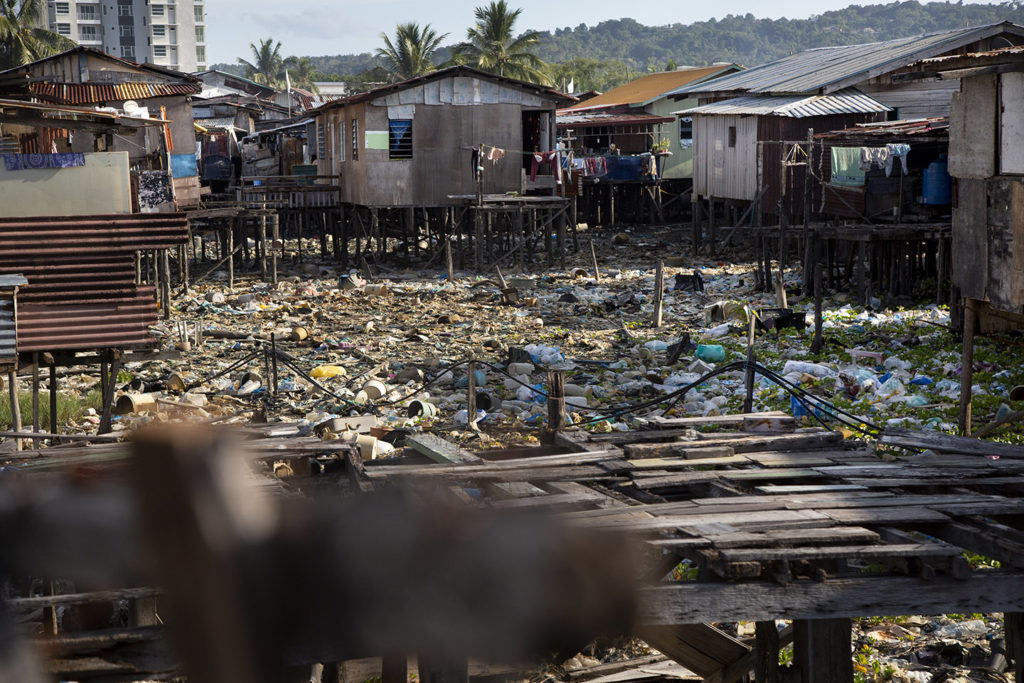 Typically, plastic pollution has taken on dramatic proportions in some places. The island of Gaya located opposite the capital Kota Kinabalu is the perfect example. On a tiny territory of 15 km2, luxury resorts have sprung up beside villages on stilts built by Filipino fishermen driven out by the Moro rebellion in the early 1980s. These villages have no access to drinking water and no waste collection system. Plastic bottles make up a large part of the heaps of plastic packaging that the community, for want of a better solution, dumps straight into the water. Added to this, due to the flow of currents, is the waste that arrives by sea from Kota Kinabalu.

In the neighbouring bay, enjoy themselves snorkelling. Do they realise how much the beauty of the seabed has been altered in recent decades? According to several locals, the coral reefs are dying out. It is still possible to admire the beautiful colours of some tropical fish, but their numbers have dropped dramatically, and some species have altogether disappeared.

Will tourists continue to come when there is nothing left to discover? Would it not be more efficient for the resorts to finance and pool the waste management of the island or even the production of drinking water, rather than paying their employees to clean the beaches every day before the clients wake up?

Collection incentive programmes, where residents were paid per kilogram of plastic waste returned, as well as cleaning competitions have already been tested on the island with great success. However, the lack of economic opportunities for the waste collected and the lack of financial support for these projects did not help to maintain them. In addition, the sorting facility installed on site, perhaps not robust enough, did not withstand the last tropical storm.

During our stopover, we worked with Now! (No more plastic in Our Water) This public-private partnership (PPP) seeks to raise public awareness and organise a sustainable value chain for plastic waste to reduce, recycle and reuse plastic, to end the dumping of solid waste into the oceans. Thanks to her formidable founder, Marinah Embiricos, we were able to assemble 25 municipalities from Sabah aboard our vessel. 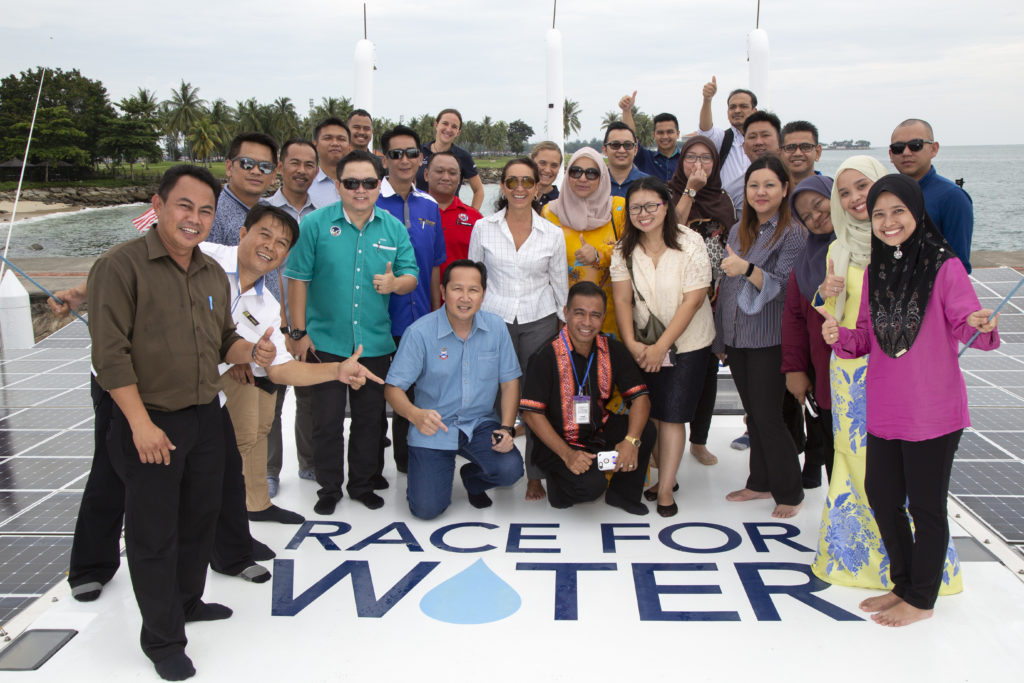 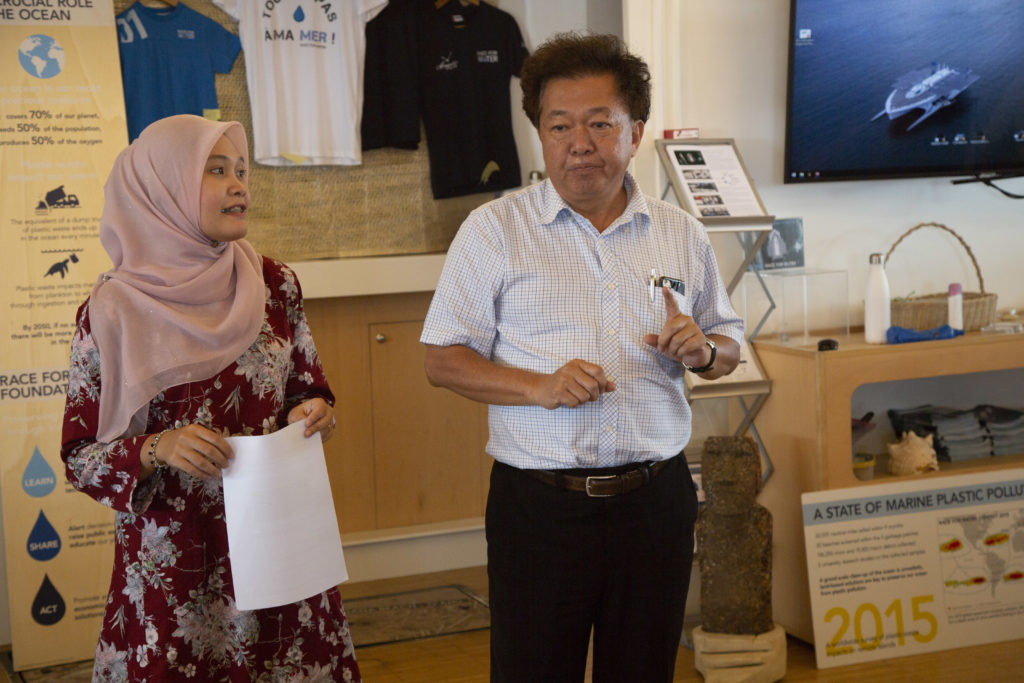 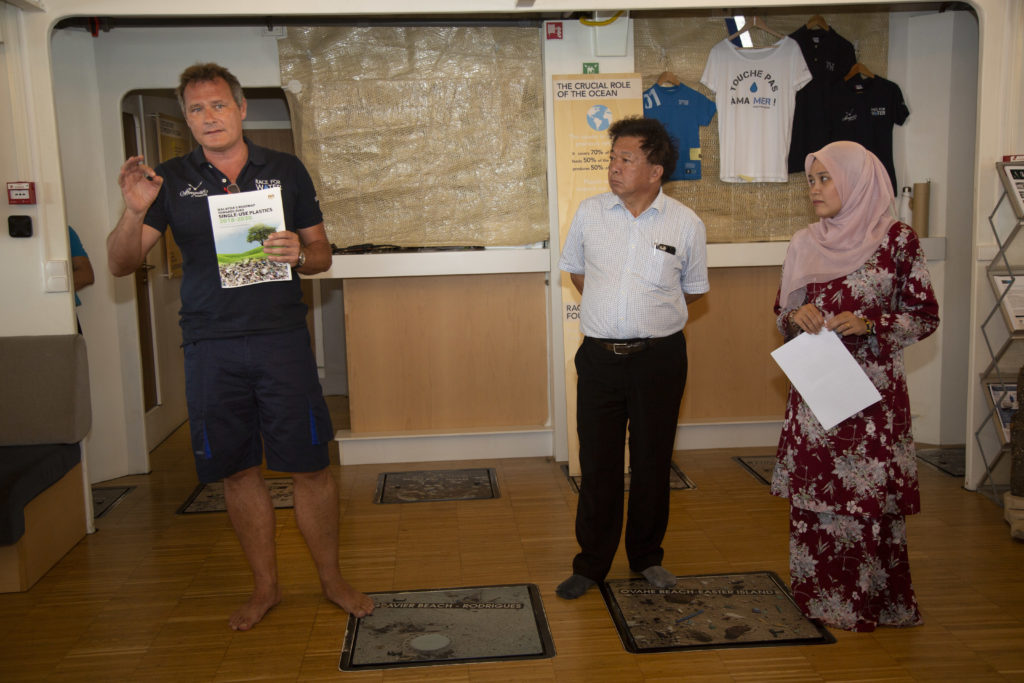 All mentioned their need for a solution for waste recovery, especially plastic waste, and the lack of means at their disposal. Most of the municipal waste collected ends up in open landfills. Only the town of Kota Kinabalu has a landfill built to standards that receives residues from 5 districts. However, this site has greatly exceeded its capacity. For lack of an alternative, its closing date planned for this year has been postponed to 2025. A sorting and recovery facility has been planned and could be up and running in 2 years. We hope that the ragpickers who are currently working on the landfill and who contribute to reducing the amount of waste landfilled every day, will not be the main losers of this necessary project, and that they will be able to take part by bringing their expertise to the sorting of recyclable waste.

Like all over the world, Malaysia needs to rethink its consumption patterns in order to reduce plastic waste production, and to consider efficient and sustainable models of waste management.

The Malaysian government has taken the bull by the horns by sending back the containers of foreign waste that have poured in over the last two years, since China closed its doors to this so-called recyclable plastic waste, most of which ended up being burned or dumped in the wild for lack of real outlets. 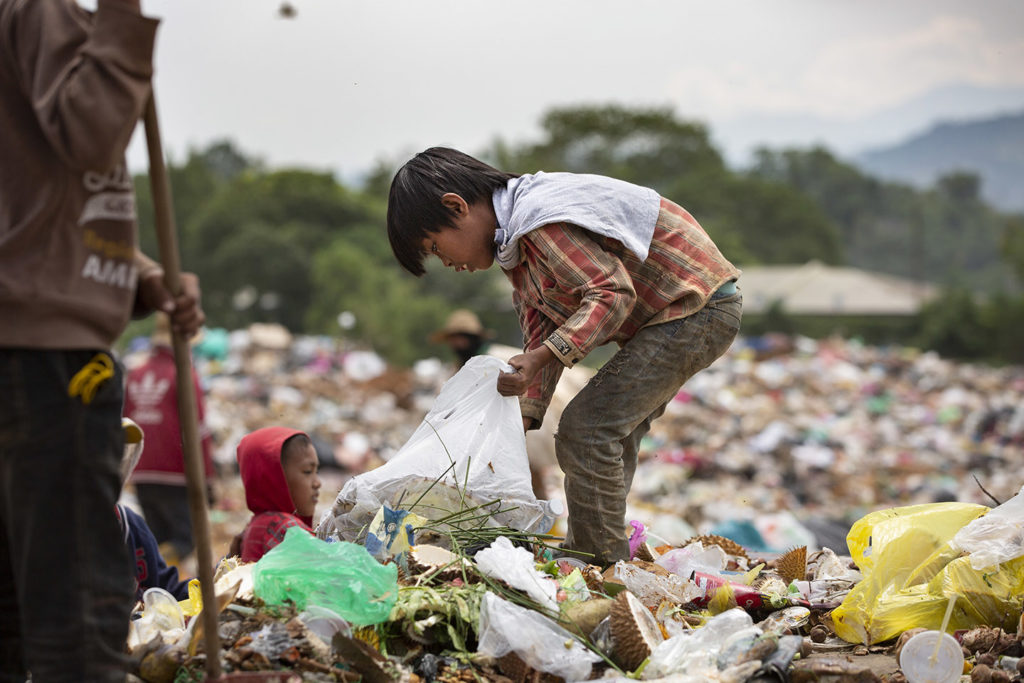 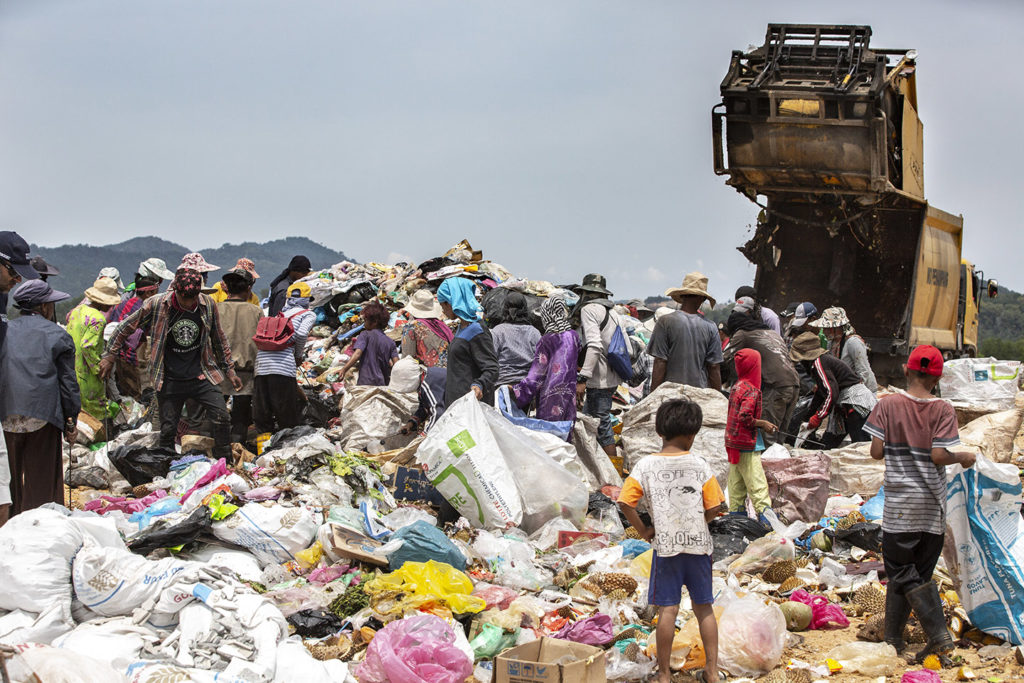 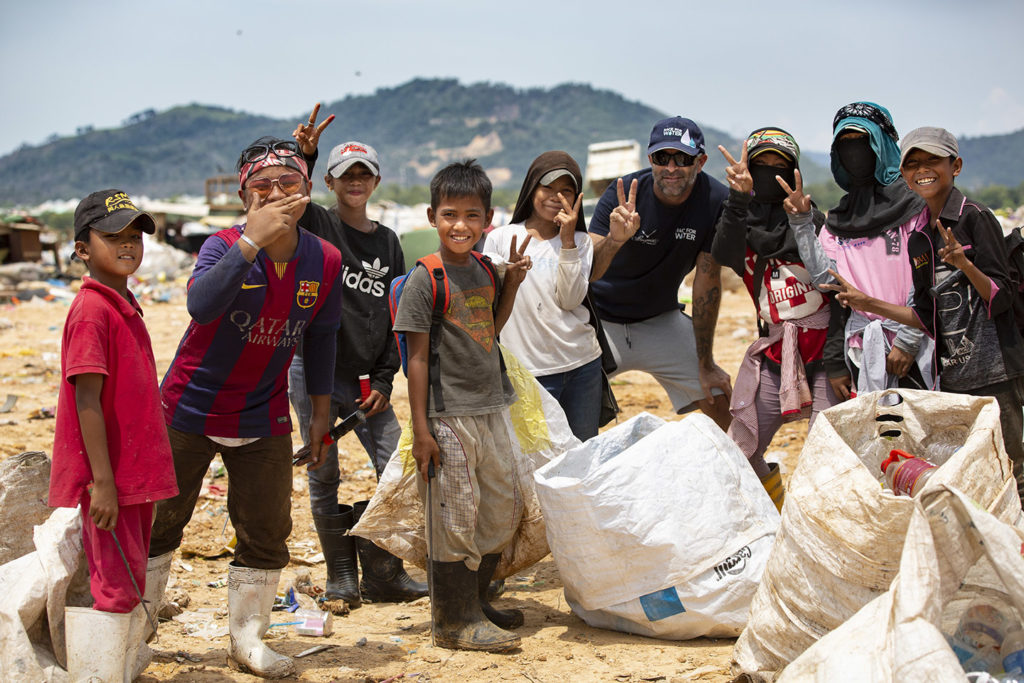 Malaysia has also decided to tackle single-use plastics. As a global player in the plastics industry with currently around 1,300 plastics manufacturers in the region, the task is not easy. Four major problems have been identified by the government: the seriousness of plastic pollution, the low rate of recycling of plastic waste, the lack of an ecological and profitable alternative, and the absence of a uniform political framework. A “roadmap to zero single-use plastics 2018-2030” has been created to raise awareness, guide regional legislators and accompany the industry in a transition to environmentally friendly products. The first measures proposed for 2019 are to charge for the plastic bags distributed to consumers and switch to a distribution of straws only on request. Each state must now implement these measures.

Kota Kinabalu is also working on an action plan and wants to become an example of a “green” city.

Collaboration agreement with the NOW Foundation

During our stopover, we were able to meet many policy makers and also private sector stakeholders aware of the urgency to provide concrete solutions. Race for Water’s proposal to set up decentralised systems for transforming plastic waste into electricity by working directly with communities and paying street collectors to recover all plastic waste has generated a great deal of interest.

Since our departure, we have been able to conclude a partnership agreement with the NOW! Foundation which we hope will mobilise the government as well as private stakeholders from the tourism sector and the distribution of consumer goods, in the implementation of a first project with us in Malaysia. 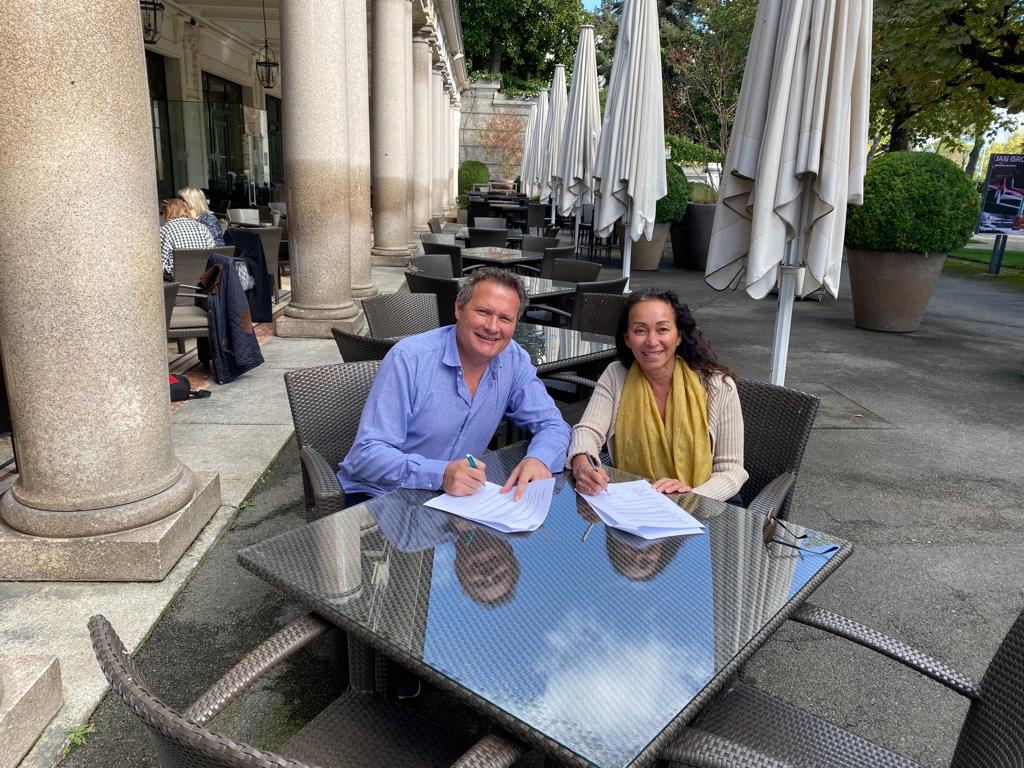