Mission from the Chilean coast to Rapa Nui Island 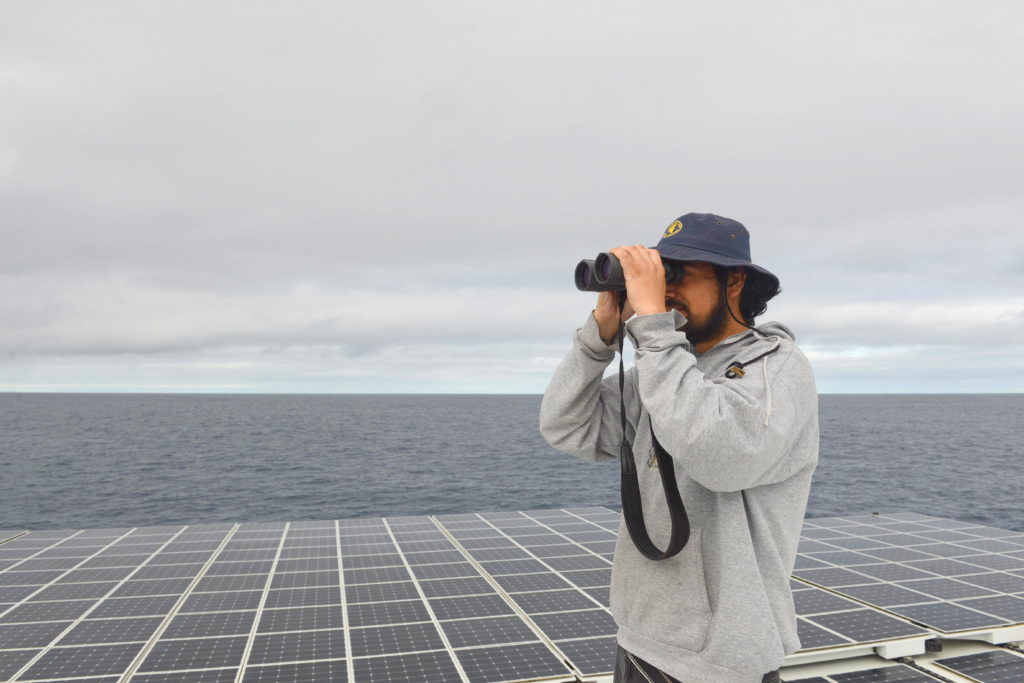 A 30-day scientific expedition was launched between Concepción and Easter Island aboard the Race for Water vessel with a view to completing 3 different missions:

This scientific expedition is a collaboration with Dr. Martin Thiel, biologist and doctor of oceanography at the Catholic University of the North (UCN) in Chile and Dr. Guillermo Luna-Jorquera, co-director of the ESMOI (Ecologia y Manejo Sustentable de Islas Oceanicas).

The on-board mission was entrusted to Diego Alonso Valverde Labarca, a Chilean scientist from the UCN, who joined our crew from Concepción to Easter Island.

Mission 1: abundance of the floating waste and seabirds at sea

For this first mission, any floating waste encountered at sea was counted from the deck of the vessel. 8 hours a day along 300m on each side of the vessel, Diego measured the groups of passing seabirds. Four species of seabirds were observed each day: the Wandering Albatross (Diomedea exulans), the Black-browed Albatross (Thalassarche melanophris), the Southern giant petrel (Macronectes giganteus) and the De Filippi’s petrel (Pterodroma defilippiana).

All the information obtained will be put into perspective with other data such as the current, the concentration of phytoplankton, the temperature of the surface water and other variables. The objective is to understand how seabirds are distributed and how plastic waste influences their distribution. 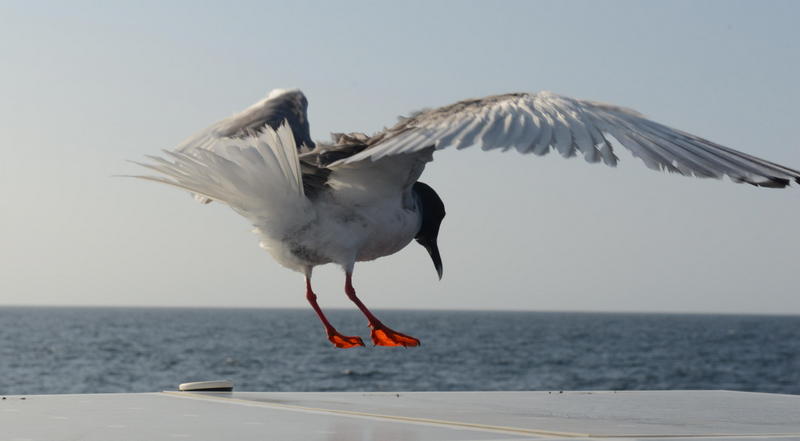 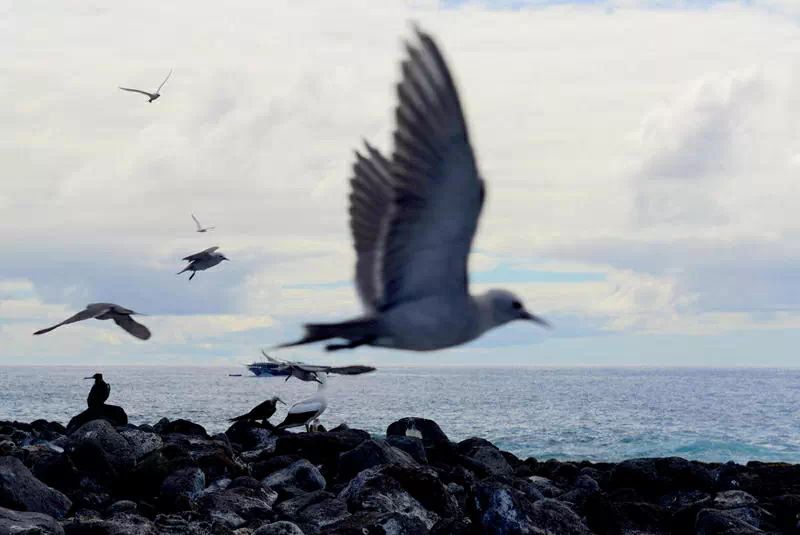 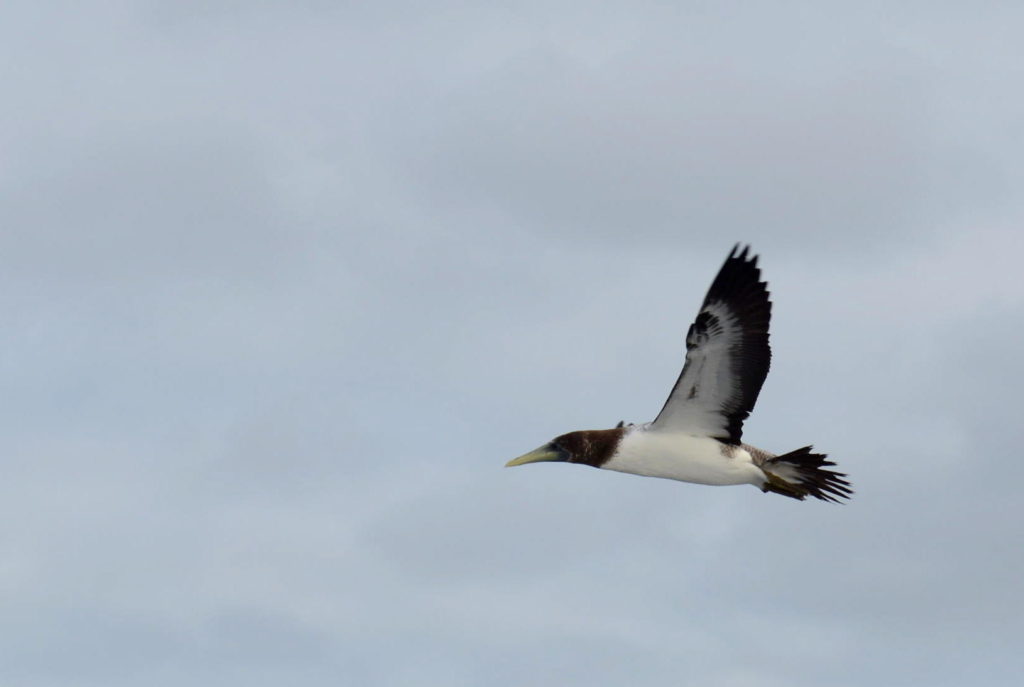 Mission 2: abundance of microplastics in the surface water

For this second mission, the abundance of microplastics in the surface water was estimated using an AVANI net. This net is used to collect microplastics in the surface waters at a speed in excess of 4 knots. At the end of each transect, it is thoroughly rinsed so that the remaining particles fall into the collector. The contents of the collector are then transferred into 95% of ethanol to preserve the organisms, which have colonised the plastic particles recovered. The samples will be analysed at the UCN in Coquimbo where the plastic particles will be sorted by shape, size and colour. The density of microplastics obtained will be extrapolated to a given zone and compared to the previous results obtained by Martin Thiel and his team in the south-eastern Pacific gyre (see Thiel et al., 2018). The organisms attached to the plastic particles will also be analysed. 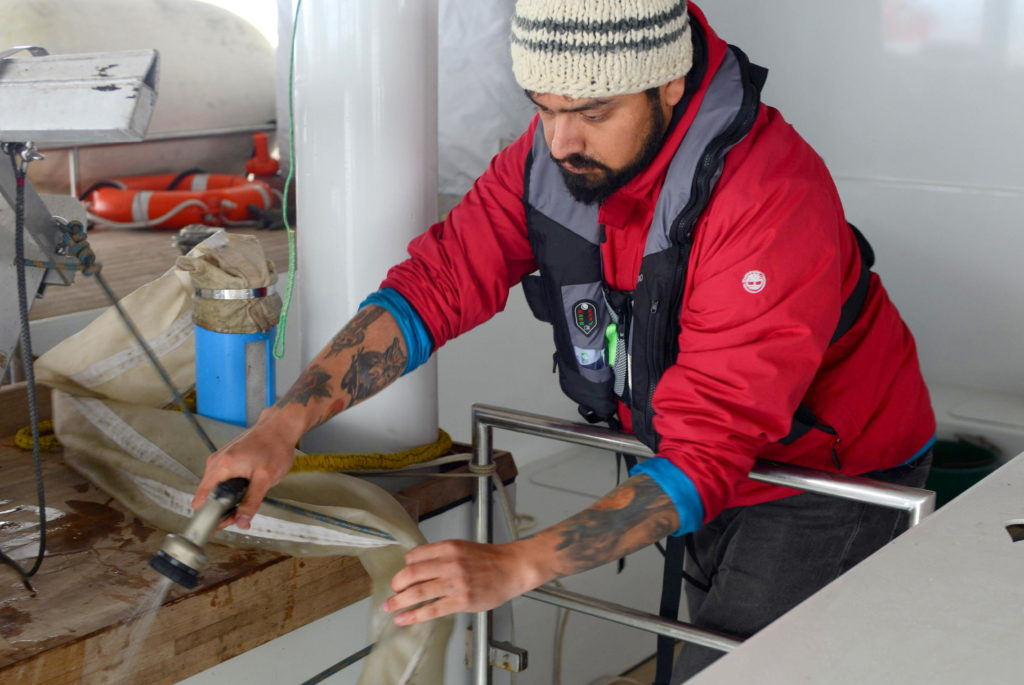 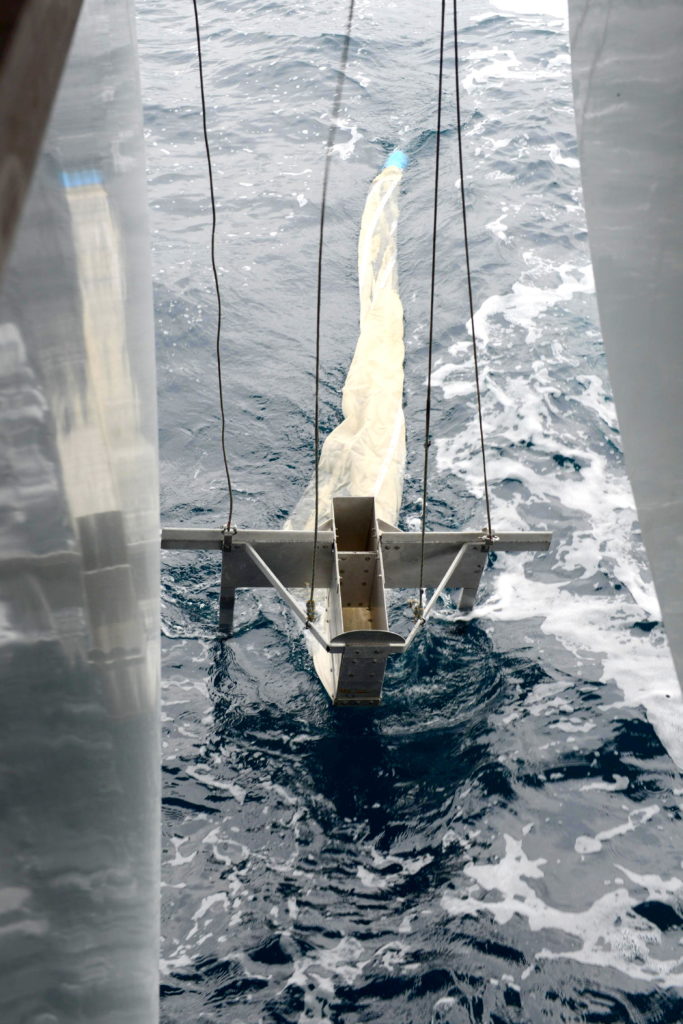 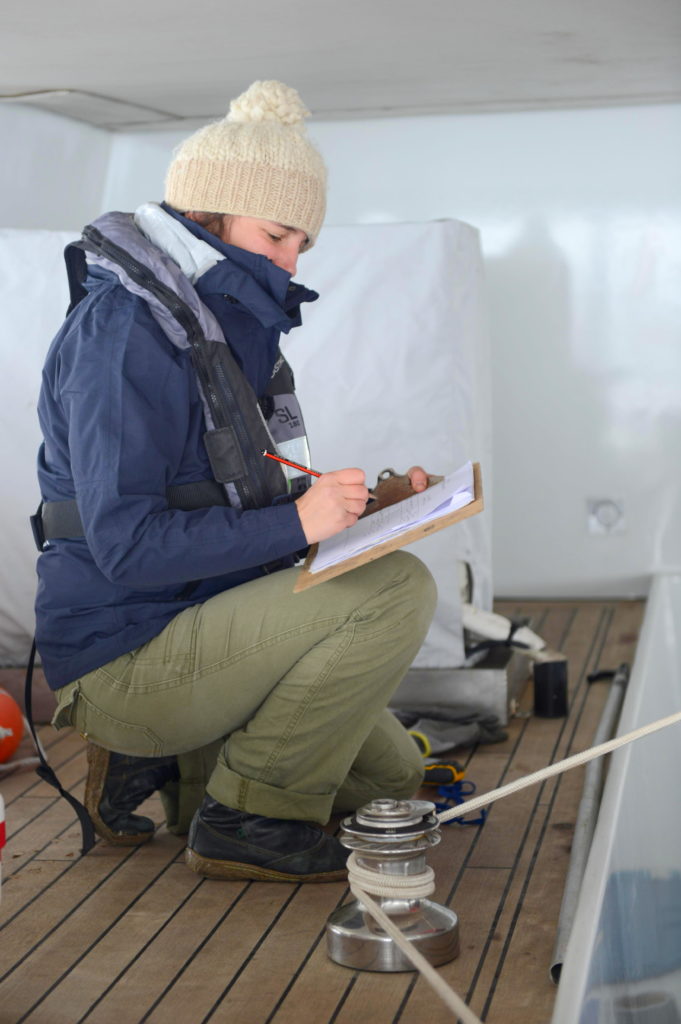 Mission 3: stopover on the island of Sala y Gómez

For the third mission a 4h30 stopover was made on the island of Sala y Gómez to assess the impact of plastic waste on nesting seabirds. In total, 30 old nests of the Great Frigatebird (Fregata minor) were collected and photographed and their GPS position noted. Other birds’ nests were photographed if they contained plastic.

With the support of the crew of Race for Water, 10 dead birds were collected to analyse their digestive content and determine the presence of plastic. Species feeding on fish did not contain plastic in their stomachs. However, all the species which feed on marine organisms floating on the surface of the oceans (here the Polynesian storm petrel and the Sooty Shearwater) had their stomachs filled with plastic. Compared with the size of their stomach, the quantity of plastic found is significant and much bigger than that for other larger species of birds. As such, it is very likely that the ingestion of these plastics caused their death.

Other samples of plastic were taken on the island’s beaches and around the colonies of birds. 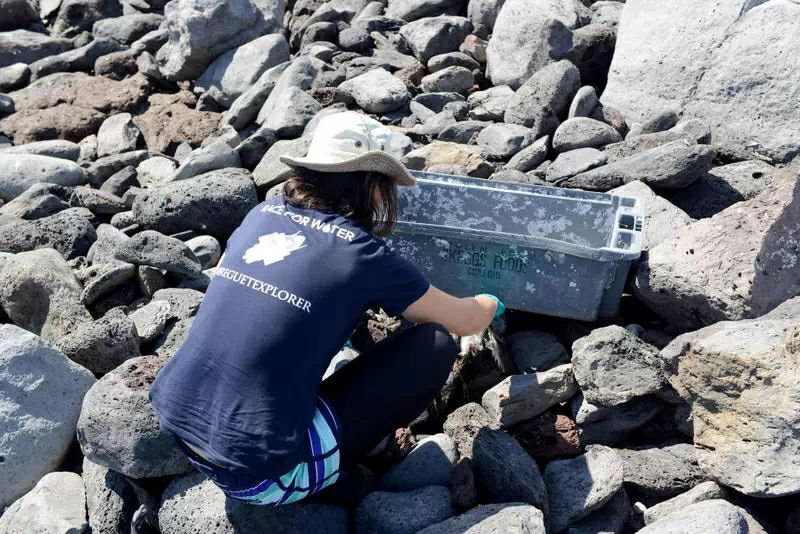 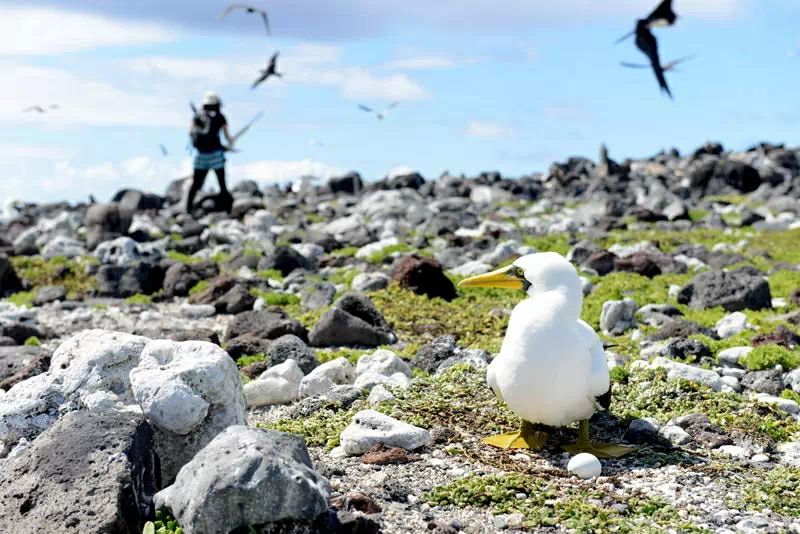 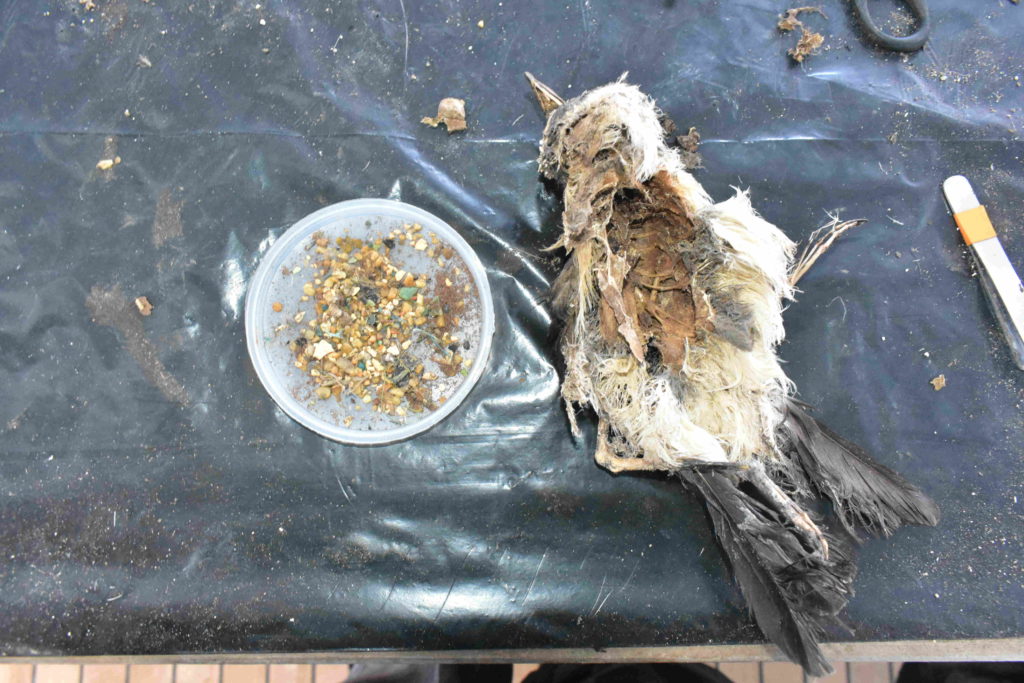 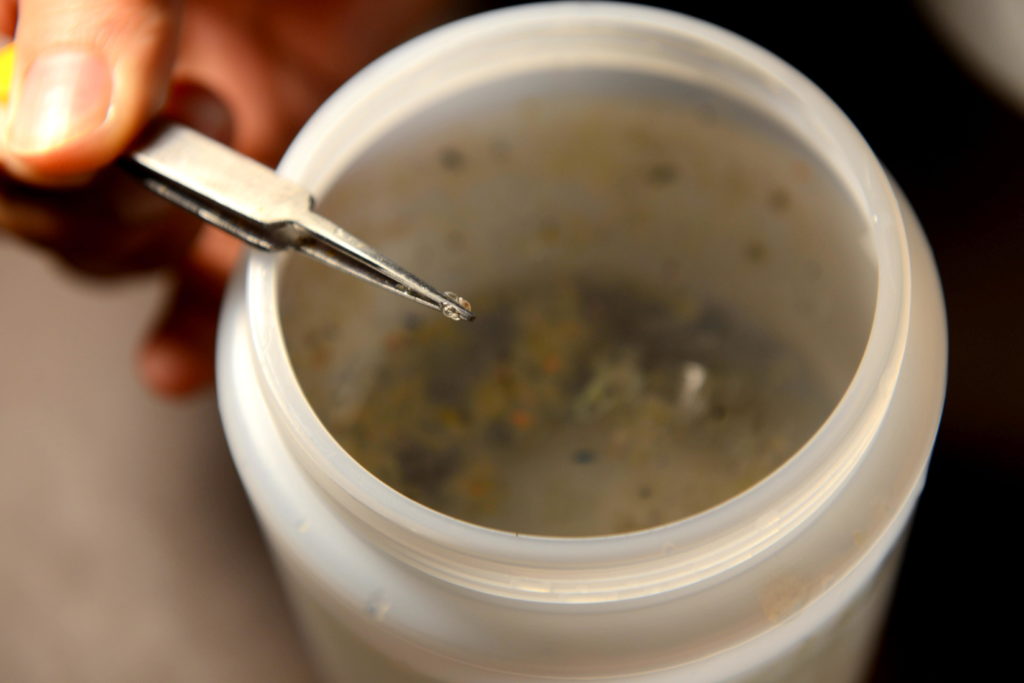 Testimony by Diego Alonso Valverde Labarca, scientist at the Catholic University of the North (UCN)

“These samples will leave Easter Island with me bound for the Catholic University of the North in Coquimbo where they will be analysed under a magnifying glass. In this way, we’ll count the quantity of particles obtained for each pass, then we’ll extrapolate the density of these microparticles for a given zone, using the summary of positions for each pass, as well as the assessment of the filtered water surface. It is also possible that we’ll analyse the organisms present on the plastic.”

For further information about these 3 missions, we invite you to consult the following articles on our Race for Water Odyssey blog: