Casting off from Lorient on 9 April, the Race for Water vessel made landfall in Madeira on Thursday 20 April 2017 for a short three-day stopover before setting a course for Bermuda again.

RACE FOR WATER IN MADEIRA FOR 3 DAYS.

This initial stopover enabled the crew to carry out a preliminary review of the energy mix aboard and carry out its first kite trials on the Race for Water Foundation’s ambassador vessel.

The Skysails Yacht team, who stepped aboard in Lorient, made the most of the twelve days of sailing on-board to train the crew in handling the kite at high altitude. The two German engineers, Xaver and Bernd organised and hosted tailored lessons: presentation of the system, handling, maintenance, theory and implementation. Thanks to the favourable weather conditions, the kite was to fly nearly every day after leaving Lorient, propelling Race for Water towards the Portuguese archipelago at nearly 5 knots without using the electric motors. The latter, driven by propellers transformed into a dynamo through the propulsion of the vessel, even became generators of energy thus recharging the batteries. According to Martin Gaveriau, the on-board engineer, the instantaneous power saved equated to around 20kW. “Of course, that’s an operating point; we’ll need many hours of navigation to optimise this performance and fine down the operating range. Be that as it may, these initial trials are very encouraging.” Tested by each member of the crew, the kite is a hit right across the board and they’re already looking forward to the next long session on the water, slipping along in the trade winds.

A pit-stop and off again!

The Race for Water vessel is set to hook up with these trade winds fairly rapidly. Indeed, after a three-day stopover in Madeira so part of the crew could disembark and fresh supplies of commodities could be brought aboard along with Marco Simeoni (President of the Race for Water Foundation), the catamaran (100% self-sufficient in terms of energy) should be able to make fast headway and is due into Bermuda around 20 May. 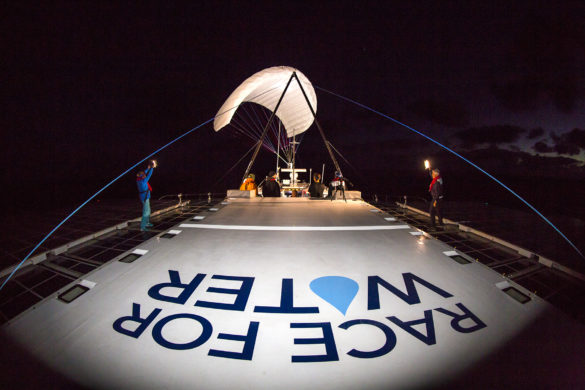