The alarming impacts of microplastics on the marine environment.

After 4 years of scientific studies and experiments conducted with our partner from the University of Bordeaux, ONIRIS in Nantes and EPFL in Lausanne, new edifying results from the Race for Water Odyssey 2015 have just been published and reveal the toxicity of environmental microplastics on the early stages of life for fish.

Following exposing fish, at different stages of evolution, to microplastics, several effects have been observed on their development, swimming behaviour and genetic integrity. These effects could, over time, lead to problems in the growth, reproduction and survival of fish, even disrupting the renewal of their population.

In these studies, microplastics samples taken from Hawaiian beaches were found to be more toxic to fish cells, embryos and larvae. The most significant effect was measured after 30 days of exposure to microplastics of Kawa Bay, when nearly 30% of the larvae died.

It is the first time that the effect of microplastics collected directly from the environment around the world has been analyzed on different stages of fish life. These results alert us of the environmental disaster caused by plastic pollution.

The Race for Water Odyssey in 2015 was a unique opportunity to obtain in a short period of time microplastic samples collected directly from different beaches around the world. These samples were previously identified and categorized by EPFL (École Polytechnique Fédérale de Lausanne) and are the subject of an previously published scientific report.

Of these samples, six were exposed to fish cells, embryos, larvae and young fish by the EPOC Laboratory team at Bordeaux University.

These islands have been selected because they are located in the heart of the North Atlantic and North and South Pacific Oceans, areas where the main surface currents are constantly transporting large amount of debris. Most of the debris is washed ashore on the coasts of these islands. The debris therefore break up in smaller particles, smaller than 5 mm, known as microplastics (MPs). 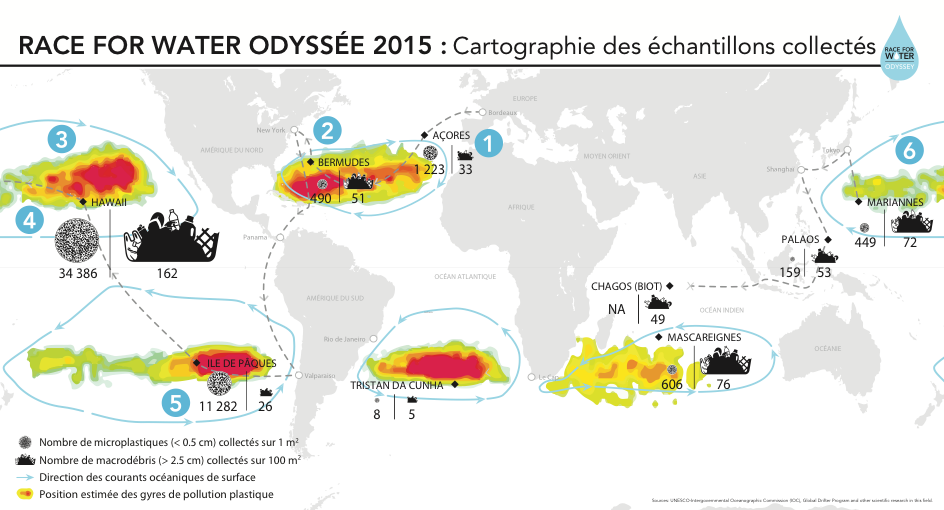 Focus on the main results of the 3 studies:

Organic micro pollutants present on the surface of the microplastics were extracted in an organic solvent. On the six microplastic extracts tested, four samples have caused damage to fish cell DNA. The most significant effect was seen in fish cells exposed to microplastics from Kawa Bay in Hawaii, which endured 30% of DNA breaks compared to the non-exposed fish cells. This DNA toxicity, called genotoxicity, could be due to the presence of polycyclic aromatic hydrocarbon (PAH) measured on plastic particles from the same beach in Hawaii. These hydrocarbons are pollutants known to cause damage to the DNA of organisms. Thus, fish cells have proven to be good tools for measuring the toxicity of pollutants present on the surface microplastic particles. 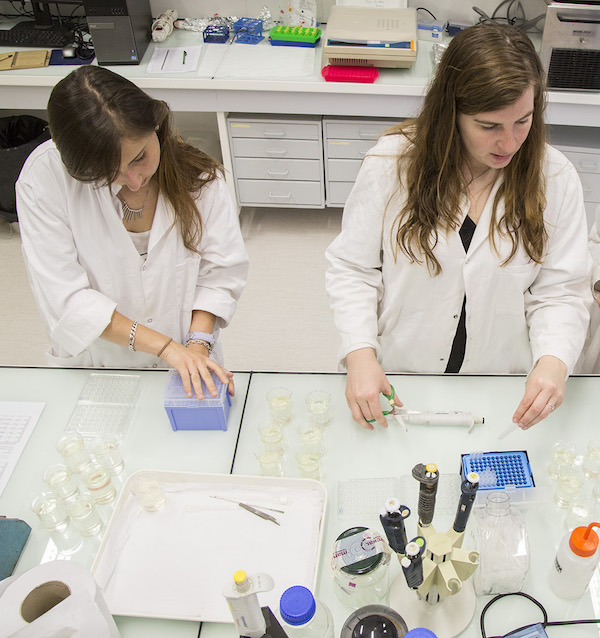 For fish embryos exposed to the same microplastic extract from Kawa Bay (Hawaii) show a  decrease of almost 10% in their hatching rate (91.5% compared to 100% unexposed embryos was observed). However, no DNA damage was measured on the fish embryos exposed to different microplastic samples. This lack of toxicity in the DNA could be explained by the capacity of their embryonic membrane (chorion) to protect them from external pollutants.

For some young larvae exposed to microplastics from Kawa Bay (Hawaii) but also to those from Pago Bay (Guam), their mobility and swimming speed were significantly affected. According to Pauline Pannetier, main author of the 3 studies: “These changes in swimming behavior can have a significant impact on fish survival in the wild. For example, a fish will be more vulnerable to a predator if its swimming speed is reduced. This weakness can also reduce its ability to feed and over time disrupt is growth.” 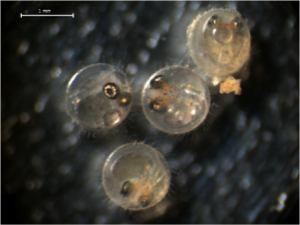 The most striking effect of this study was measured after 30 days of exposure, where nearly 30% of the fish larvae fed with microplastics from Kawa Bay died (27.8 ± 3.9% compared to uncontaminated larvae).

All fish larvae were fed a mixture of microplastics and food. Images taken with a biphotonic microscope confirmed that these larvae ingested the microplastic along with their food. In the image below, microplastics appears in blue and the food in yellow in the digestive tract of the larvae. 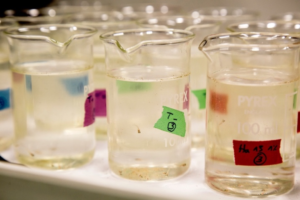 All these results highlight the fact that the early life stages of fish are vulnerable to plastic pollution. Young fish seem to have more difficulty in dealing with the cocktail of pollutants in the microplastics found in the environment.

While many of the studies on the impact of microplastics on marine fauna and flora are carried out using microplastics directly from the plastics industry, our scientific partners have confirmed that environmental microplastics are more toxic than industrial microplastics which haven’t travelled in the oceans. What makes these “travelling” microplastics toxic is the fact that they are real sponges for pollutants (metals, persistent organic pollutants, etc.). Other reasons may explain this environmental microplastic toxicity, such as their physical (type, size, shape, etc.) and chemical (presence of additives, etc.) properties but also their ageing in the natural environment or the colonization of microorganism into their surface.

It is therefore important to consider the various effects observed of these environmental microplastics on the DNA integrity, growth, immune defense capacities and swimming behavior of these young fish at the early life stage of their development.

Further studies are needed to deepen our knowledge of the impact of these microplastics in aquatic organisms but also on human health.

Read more about these three studies: